If you are considering attending the Grimes County Precinct and County Conventions, Please complete this very short Pre-Registration Form to help speed-up Registration in person.
Click HERE to Pre-Register

We will be following the guidelines prescribed by President Trump and Texas Governor Greg Abbott. Pre-Registration is especially important this year in light of the Covid-19 Pandemic. Thank you for helping! 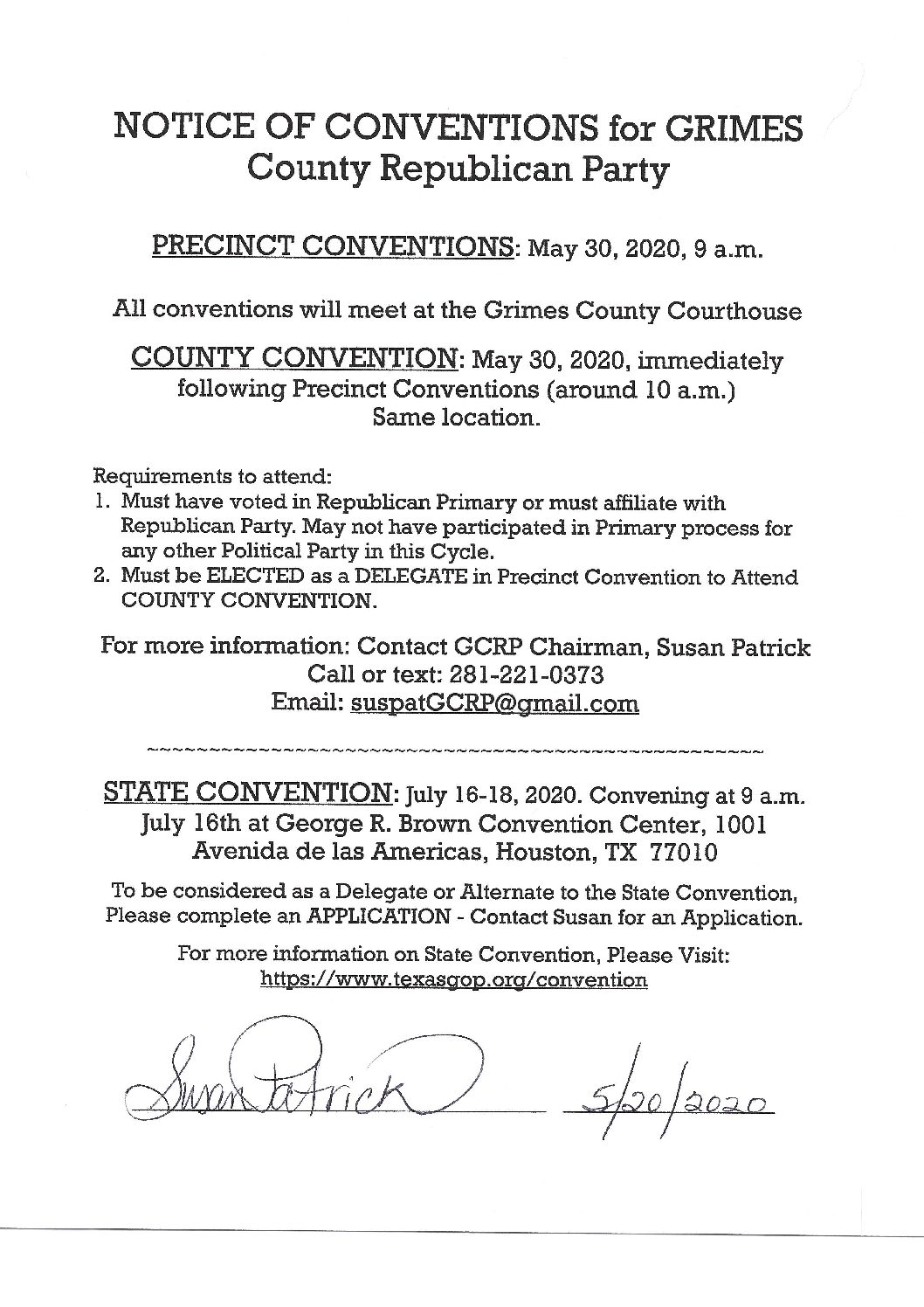 Our May 30, 2020 Conventions are ON!
We will follow President Trump’s and Governor Abbott’s guidelines! We will have hand sanitizer and we will practice social distancing. Masks will be allowed but not required. If you are interested in attending, please find and complete Pre-Registration on this website or contact Chairman Susan Patrick at suspatGCRP@gmail.com

Resolutions Committee will meet Wednesday, May 27 at 1:30p.m. at the GCRP Headquarters in Navasota, TX across from the Post Office on Farquhar St. Chairman – Dianna Westmoreland

Nominations Committee will meet on Saturday, May 30 between the precinct conventions and beginning of the County Convention ( 9:30a.m. until 10:00a.m.) at the Courthouse in Anderson. Applications to State Convention are found on this website.

Credentials Committee will meet on Saturday, May 30 between the precinct conventions and beginning of the County Convention ( 9:30a.m. until 10:00a.m.) at the Courthouse in Anderson.

Due to the Social Distancing Orders and the National Emergency and Disaster Proclamations both by our Governor and locally, the Grimes County Republican Party will postpone our precinct and County Conventions until it is considered safe to gather. The new date and time will be posted here at least 72 hours before our conventions will be held!

Please email any resolutions and interest in attending the State Convention in the meantime.

The Local Canvass for the GRIMES County Republican Party Primary Election will begin at 10:00am, on Thursday March 12, 2020

PLEASE COME JOIN US & BE PART OF THE PROCESS!

If you would like to be considered as a Convention Delegate or Alternate, please review and complete THIS application and return it to County Vice Chairman Gary Williamson no later than 21 March 2020. Applications can be submitted in person or via email to rd.nscc083@gmail.com.

YOUR VOTE MATTERS! YOUR VOTE IS YOUR VOICE!

Trump’s Average Unemployment Rate is the Lowest in Recorded History

“President Trump starts off 2020 having presided over a lower average unemployment rate than any president at a comparable point in office in recorded history,” Philip Klein reports in the Washington Examiner.

“Since February 2017, Trump’s first full month in office, the monthly unemployment rate has averaged 3.9%. No prior president has averaged less than 4% over the first 35 months of his presidency. The closest was Dwight Eisenhower.” The unemployment rate for December held steady at a historically low 3.5%, according to Friday’s jobs report.

“The Trump administration on Friday marked the 100th mile of wall construction along the southern border”—the first part of many more miles to come, Acting Homeland Security Secretary Chad Wolf says. “Officials have said that there is no comparison between the old Vietnam-era landing mats and the new 30-foot structures—complete with cameras, access roads, lights and other tech,” Adam Shaw reports for Fox News.

“Senate Democrats are breaking with their party leaders over House Speaker Nancy Pelosi’s decision to hold on to the articles of impeachment, saying it is time to get President Trump’s trial rolling . . . Senate Republicans have remained united behind Mr. McConnell’s demand for a trial process that would mirror the 1999 impeachment trial of President Bill Clinton,” Alex Swoyer and Gabriella Muñoz report in The Washington Times.

“Naturally, the Obama alums were in perfect sync with the dominant media narrative in the four days between the Soleimani strike and Iran’s feeble retaliation. They helped feed the breathless headlines and feverish speculation that the coming conflagration would rattle the world . . . Instead, they all had egg on their faces for getting the big story wrong. Again,” Michael Goodwin writes in the New York Post.

President Trump’s tweet in Farsi supporting Iranians who are protesting Supreme Leader Ayatollah Ali Khamenei has earned more than 350,000 likes, making it the “most liked Persian tweet” ever, Carlin Becker reports for the Washington Examiner.

We will set our Grimes County Candidate Ballot Order at our NEW Headquarters at 11AM on December 19! The Ballot Order will be set by a random drawing and will include every position that will be voted on in the March REPUBLICAN PRIMARY ELECTION! The Headquarters is in Navasota at 114 Farquhar St. across from the Post Office! Please join us for the event and some Christmas Cheer!!

Interested in running for Elected Office in Grimes County?

The deadline to file an application is Monday, December 9th at 6pm.

No applications can be accepted after this time.

To file an application, please contact Chairman of the Grimes County Republican Party, Susan Patrick, at 281-221-0373 for information or an appointment. The Chairman will be at Republican Headquarters (112 Farquhar) in Navasota on Monday, December 9th from 3-6pm.

Republican philosophy is a true reflection of traditional Texas values. It is these values, core Republican principles, that will sustain Texas into the future and continue to make our State strong, prosperous and proud.

* Strong Families
* Limited Government
* Honest Compassion
* Opportunity For All
* Quality Education
* Personal Responsibility
* Rugged Individualism
* A Sovereign America & Texas
* Principled, Innovative Leadership
* Freedom that is God given, affirmed by our Founding Fathers, articulated in the Declaration of Independence, and protected by the Constitution